A circular artwork crafted by potter Richard Miller, has been created to enable local children and families to feel a connection with the Park.

The names of 320 children, living close by at the time of construction in 2009, each with their own tile, have been incorporated, together making a circular artwork. The Children’s Tile Circle was formally unveiled by Her Royal Highness The Countess of Wessex on 8th July 2010.

At the centre of tiles is an olive tree, “the tree that feeds the children” according to Sophocles. It is also a symbol of peace. The tree is from Valencia, on the eastern coastline of Spain and is between 50 and 75 years old. 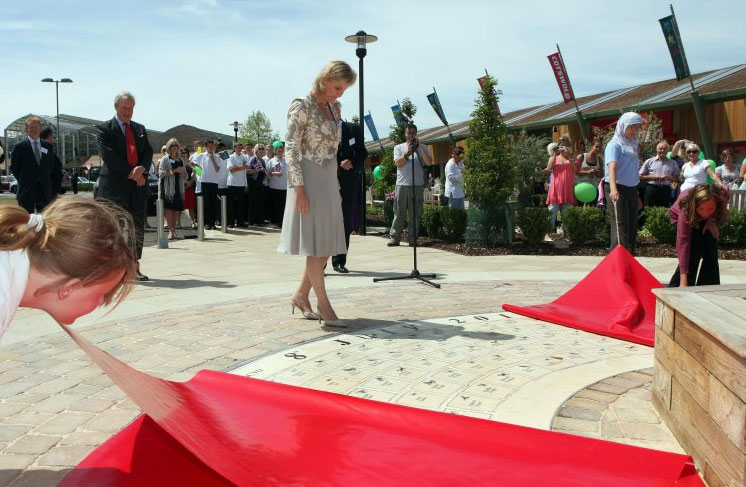 Her Royal Highness The Countess of Wessex unveiling the Children’s Tile Circle.

Children From Local Schools Got Involved

Richard Miller runs Froyle Tiles and is based at the old Farnham Pottery in Wrecclesham, a small village in Surrey. Handmade tiles and ceramics have been made in these buildings since 1872, with Sir Edward Lutyens and Gertrude Jekyll among its customers.
Many of the processes that Richard uses have not changed for generations, for instance the pug mill that extrudes blocks of stoneware clay, removing any bubbles of air in the process.

Richard used was a mix of Cornish, heavily grogged* stoneware and a smooth white Irish clay. This was to give the clay body and the ability to be made into large uniquely shaped tiles without promoting cracking. It also means the tiles are frost-proof. 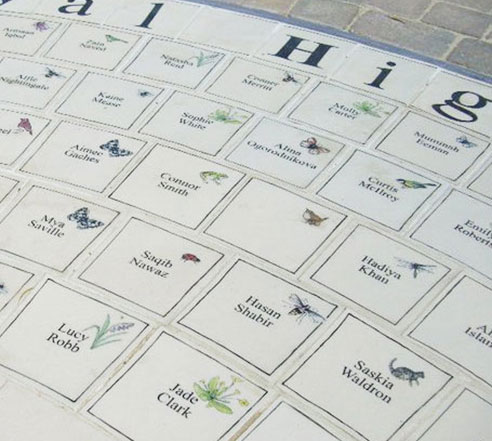 The decorative tiles with the children’s names. 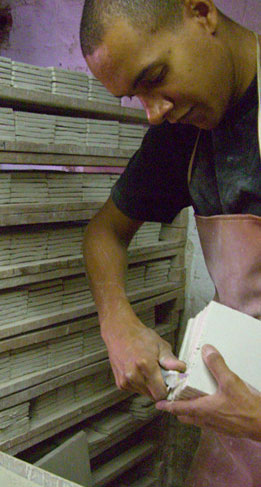 The two clays were mixed together using the wire wedging process, almost like kneading bread. Then the clay was pressed into a bench top mould to create a square tile, larger than the actual tile to be made. Paper was put into the mould first, so that the tile could be lifted free once its top surface had been cut and smoothed down. The tile was dried for 30minutes before being cut into its final shape, using a bespoke template.

After one night, each tile was flipped over onto a rack for drying. The drying took 3 days. Once the tile was dry, a glaze was applied, in liquid form, and it was then put into the kiln for a 3 day firing cycle. The firing achieved a top temperature of 1280 degrees centigrade.

The decorative artwork was sent to an external company, in Stoke on Trent, who produced the name images in a ceramic enamel put on to plastic coated paper. The paper was then soaked down and the enamel floated onto the glazed tile surface. This was done for each of the 320 name tiles.

After the name was applied the tile then went back into the kiln for a further three days and was fired to 950 degrees centigrade to sink the enamel into the glazed surface. This temperature provides the fusion between the two surfaces.

Visit Richard’s website’s for information about his work froyles.com and froyletiles.co.uk.

* Grog is ‘ceramic’ terminology used to describe the addition of course particles in the clay body. This is usually either sand or ground and graded fired clay.